Abortion rights rallies across US 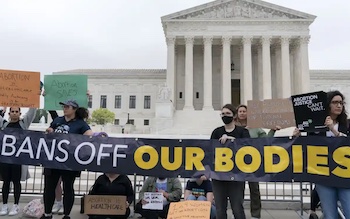 A leak from the US Supreme Court suggests the national right to abortion could be overturned, which has sparked protests across the country.

The US Supreme Court is set to overturn the landmark 1973 Roe v. Wade judgment that legalised abortion in the country, according to a report in news outlet Politico. On May 2, Politico published a leaked document – a draft Supreme Court opinion – suggesting that the US Supreme Court is in favour of overturning the Roe vs Wade decision. The draft quoted Justice Samuel Alito as saying, “Roe was egregiously wrong from the start. Its reasoning was exceptionally weak, and the decision has had damaging consequences.”

Many began flooding the streets, from the steps of the Supreme Court to New York, Nevada, Texas, and California, reacting to the potential decision by the nation’s highest courtOutside the Supreme Court – the number of protesters condemning the draft ruling vastly outnumbered those in favour.

Anti-abortion and pro-life demonstrator lit candles and prayed, while those in favour of abortion rights chanted and shouted expletives about Samuel Alito, the rightwing justice on the court who wrote the opinion that was leaked to Politico.

Police and protesters briefly clashed in downtown Los Angeles after a rally of 400 people gathered in front of the federal courthouse to protest the ruling. In Washington, nearly, 1,000 people assembled in front of the Supreme Court in Washington urging continued federal protection for abortion rights.

New York City witnessed the day’s biggest protest with over 2,000 people coming together in lower Manhattan’s Foley Square with signs saying “Abortion is Freedom.” In Manhattan, Attorney General Letitia James said told demonstrators that nearly two decades ago, she “walked proudly into Planned Parenthood” and had an abortion.

Several hundred people marched in Austin, Texas, and small protests were held in cities across California.

The court is due to make a final decision in June or early July – but a draft has emerged. If the right to abortion is overturned, US states would be free to set their own rules. It’s expected that around half the states would then ban abortions.

President Joe Biden joined leading Democrats in decrying the leaked decision, saying that a “woman’s right to choose is fundamental”.

Anti-abortion groups, in contrast, celebrated a major victory, saying the ruling would “save the lives of millions of unborn children”.

The governors of 17 US states and territories including Wisconsin, New York, California and New Jersey have penned a letter urging Congress to codify abortion rights and ensure Americans “have meaningful access” to reproductive healthcare services.

In the letter, the governors say that reproductive healthcare decisions should be made by patients and healthcare providers, and “not by politicians”.

What is Roe vs Wade?

The Roe vs Wade ruling in 1973 gave women in the US an absolute right to an abortion in the first three months of pregnancy, and limited rights in the second trimester.

The shockwaves from the leaked Supreme Court draft ruling are reverberating across the US; since Roe v Wade legalised abortion nationwide in 1973, many women have fought tirelessly to overturn it, believing the life of an unborn child begins at conception.

If the leaked draft opinion becomes a law, abortion would be illegal in at least 22 US states and approximately 36 million US women could lose access to abortion.

Draft opinions are not final. Justices sometimes shift their views as the opinion-drafting process unfolds. According to Politico, major decisions can be subject to multiple drafts and vote-trading, sometimes until just days before a decision is unveiled.

US politicians too are largely divided on the subject: majority of Democrats support abortion rights and majority of Republicans oppose it.

US Chief Justice John Roberts on Tuesday ordered a probe into the leak of the draft, calling it an “egregious breach of trust.” 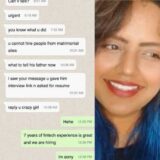 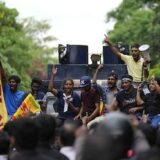