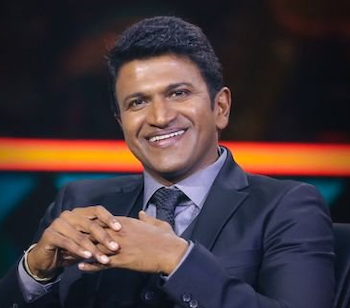 Puneeth Rajkumar, one of the leading actors of Kannada cinema, has died of a massive heart attack.

He was laid to rest at Sree Kanteerava Studios in Bengaluru on Sunday morning, beside the grave of his father, the legendary actor of Kannada cinema Dr. Rajkumar, in Bengaluru.

His body was taken in procession from the stadium to Sree Kanteerava Studios for his last rites. Thousands of his fans walked through the procession

He is survived by his wife Ashwini Revanth and two daughters Dhriti and Vanditha.

In 1994, Dr. Rajkumar had pledged his eyes to be donated after death. The family has continued the legacy and donated Puneeth’s eyes. A team of doctors performed the procedure within a six-hour window after his death. In a first for Karnataka, Kannada star Puneeth Rajkumar’s eyes were donated to four people on the same day. This was done using an advanced technique (cornea of each eye was sliced in half, with the front portion given to one beneficiary and the second portion to another) and the transplant was free in honour of the Rajkumar family, according to Dr Bhujang Shetty, chairman and managing director, Narayana Nethralaya.

The young actor had developed chest pain in the morning and visited his family doctor, with his wife, for an ECG. The doctor advised that he should be rushed to the hospital. He was admitted to Vikram Hospital’s ICU in a serious condition around 11.30 am.

Earlier in the day, the actor had wished his brother and superstar Shiva Rajkumar for his newly released film Bhajarangi 2. Puneeth had tweeted, “Best wishes for the entire team of #Bhajarangi2. @NimmaShivanna @NimmaAHarsha @JayannaFilms.”

Puneeth, fondly called Appu and Powestar, was last seen in the movie Yuvarathnaa which was a super hit.

He was born in Chennai to the matinee idol Rajkumar and Parvathamma Rajkumar. He is their fifth and youngest child. His elder brother, Shiva Rajkumar, is also a popular actor.

As soon as news of his illness broke, all the industry stalwarts including Gurudutt, Ravichandran and Karnataka Chief Minister Basavaraj S Bommai rushed to the hospital to pay him a visit.

Large groups of fans began to gather outside Vikram hospital, after hearing the news that the actor was admitted there.

Puneeth’s brother Shiva Rajkumar too rushed  to the hospital as soon as the news spread.

Dr Ranganath Nayak, Vikram Hospital, Bengaluru had told media earlier, “Actor Puneeth Rajkumar was admitted after suffering chest pain at 11.30 am.Trying our best to treat him. His condition was bad when brought to hospital”.

Puneeth started his career as a child artist with 1985 film Bettadu Hoovi, and even won the National Film Award for Best Child Artist.

Meanwhile, security around Puneeth’s house has been increased, following his death.

A sea of grieving fans poured into Bengaluru’s Kanteerava Stadium Friday evening to pay last respects to their idol.

Puneeth’s untimely demise sent shockwaves across the country, with tributes pouring in from all quarters.

“Shocked to hear about Puneeth passing away. Such a young and vibrant personality gone so soon. Met him just a couple of times. But can never forget his hospitality, humble and down to earth nature. My prayers and strength to his family and loved ones”, said ‘Baahubali’ director S.S. Rajamouli.

“Absolutely Shocked. At a loss for words. My old friend Puneeth garu no more. We had such mutual respect and liking for each other. Still Can’t believe it. May his humble soul rest in peace,” tweeted Allu Arjun.

Kerala star Mohanlal said on Twitter, “The loss of Puneeth Rajkumar has come as a terrible shock. I still find the news hard to believe. It feels as though I have lost a younger brother. My thoughts & prayers go out to his family with whom I share a close bond. I wish them strength & comfort to cope with this loss.”

“Shocked and deeply saddened by the tragic news of Puneeth Rajkumar’s demise. One of the most humble people I’ve met and interacted with. Heartfelt condolences to his family and loved ones”, said actor Mahesh Babu in a tweet.

Chiranjeevi tweeted, “Shocking, devastating and heartbreaking! #PuneethRajkumar gone too soon. Rest in Peace! My deepest sympathies and tearful condolences to the family. A huge loss to the Kannada/Indian film fraternity as a whole. Strength to all to cope with this tragic loss!”

Actress Khusboo Sundar tweeted, “Appu, you cannot leave us so shattered. You are a gem I have known. I am not able to take this news. Don’t go Appu.. come back..pls come back. Pls. #RIP #PuneethRajkumar”

Vivek Oberoi posted, “Shocked and deeply heartbroken to hear this terrible news! We will all miss you, dear Appu. You will live in our hearts forever! My condolences and prayers for the family to deal with this deep pain. #PuneethRajkumar.” 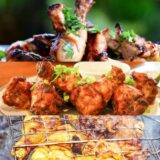 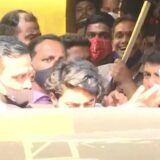