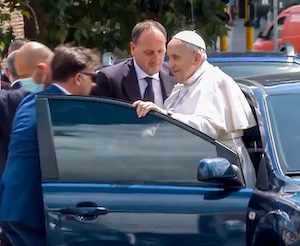 Pope Francis was discharged from a Rome hospital on Wednesday, ten days after a three-hour surgery that removed half his colon.

He returned to the Vatican, where he is expected to take two weeks of total rest.

“Let us not forget to pray for the sick and for those who assist them,” the pope tweeted as he left the hospital. He thanked all those who had been “close to [him] with prayer and affection” during his hospital stay.

Just as he does after any foreign trip, Francis took a detour to Rome’s Santa Maria Maggiore basilica, praying before an icon of the Virgin Mary and offering prayers to others.

When he reached the Vatican in a blue Ford, Francis left the passenger seat with the help of a bodyguard, greeted two security guards and got back in the car before entering the Vatican’s Perugino gate.

The pope “expressed his gratitude for the success of his surgery and offered a prayer for all the sick, especially those he had met during his stay in hospital,” Vatican spokesman Matteo Bruni said in a statement.

On July 4, Francis had half his colon removed, in his first major surgery since becoming pope in 2013. The Vatican said the operation addressed a “severe” narrowing of his large intestine — a bowel problem common in older people. The procedure, however, was planned, slated for when Francis would normally take time off.

During the pope’s hospital stay, the Vatican offered daily progress reports — including that the pope had breakfast, read newspapers, walked around, had a brief fever and that the fever was gone.

On the eve of his release, Francis visited the paediatric cancer ward, which shared a floor with the papal suite.

On Sunday, the pope made his first public appearance since the surgery to deliver the weekly Angelus blessing from the hospital’s 10th floor. He did not speak about his surgery but thanked the staff at Agostino Gemelli Polyclinic and called for free health care for all.

“I am happy to keep this Sunday appointment,” Francis said during the appearance.

Though the pontiff frequently travels and lives life at a fast pace, the operation renewed questions about the remaining years of his papacy ahead of his 85th birthday in December.

“This is a big operation for a man in his 80s, even though I understand he was in fine condition before,” Walter Longo, chief of colon and rectal surgery at Yale University’s School of Medicine, told the AP. “There’s no question he will require a lot of physical therapy and recovery time.” 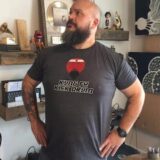 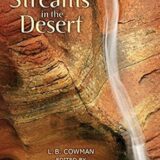 Next Story
Streams in the Desert