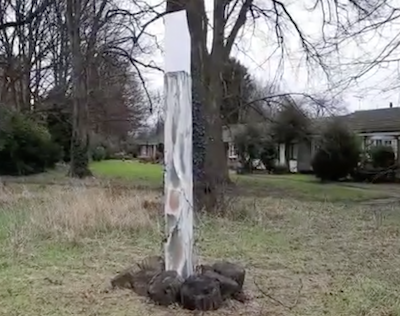 A mysterious monolith has been erected outside a Birmingham church, prompting speculation about where it came from.

The tall, slender totem was reportedly seen for the first time in late December in the grounds of the Grade II* listed St Giles Church on Church Road.

It has an odd engraving across it.

The inscription appears to be a backwards ‘S’ which is used in Latin or may denote a fractional Roman numeral. Church leaders are perplexed as to who was behind the strange formation.

“I’ve spoken to a vicar at the church and they don’t know why it’s there,” local Samantha Wells told Birmingham Live.

“I’ve looked at the inscription and don’t know what it means, though a girl aged about nine said to me that ‘It’s something to do with rebirth’ – I don’t know how she knew that or where her parents were at the time!”

In yet another bizarre twist, the monolith also appears to glow at night.

“I don’t know where the power is coming from for the lights,” Wells added. “There are some sliced tree trunks around the base but I’ve got a bad back so I’m not going to be lifting those to find out.”

St. Giles dates back to 1291. On its long list of rectors is Thomas Bray, the famous abolitionist and preacher who helped establish the Church of England in the US state of Maryland. 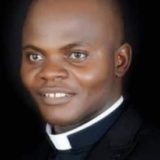 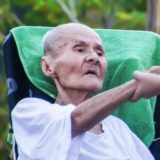 Next Story
Why am I still here?