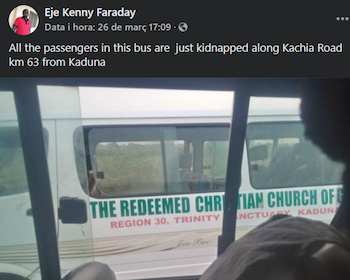 The Daily Post Nigeria has reported that eight members of the Redeemed Christian Church of God, (RCCG), were abducted while on their way to Kaduna.

Gunmen intercepted the RCCG bus along the Kachia – Kafachan road, and took eight passengers, all missionaries, into the bush before placing a N50million ransom (roughly $122,000) for their release.

While authorities have yet to release a statement on the recent attack, multiple sources have confirmed its authenticity, including eyewitness Eje Kenny Faraday, who stated in a Facebook post that he barely escaped from being kidnapped on Friday.

“All passengers in the bus are just kidnapped along Kachia Road, Km 63 from Kaduna,” wrote Faraday, sharing a photo of the empty RCCG bus whose inscriptions reads: “The Redeemed Christian Church of God, Region 30, Trinity Sanctuary, Kaduna.”

State Police Public Relations Officer, Mohammed Jalige, said: “The divisional police officer in charge of the area reported to us in the early hours of today (Saturday) that a vehicle with the inscription, ‘Redeemed Christian Church of God’ was found by the roadside with no occupants.

“The vehicle was about to be taken into custody when we received a phone call that some people were on their way from Kaduna to the scene; they brought an extra key for the vehicle. So, instead of towing the vehicle, we just allowed the church to take it away,” Mohammed Jalige said.

A search for the missionaries has been launched by the police and the military. 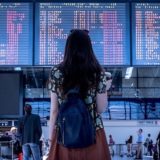