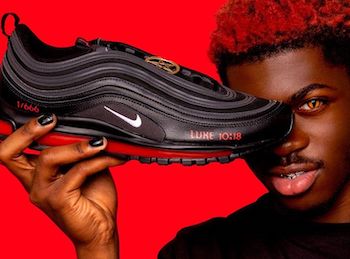 Nike is suing Brooklyn art collective MSCHF over a controversial pair of “Satan Shoes” that contain a drop of real human blood in the soles.

MSCHF released 666 pairs of the shoes on Monday in collaboration with rapper Lil Nas X and says they sold out in less than a minute.

The black and red shoes were “dropped” by MSCHF on Monday, coinciding with the launch of Lil Nas X’s latest song Montero (Call Me By Your Name), which debuted on YouTube last Friday.

In the video, the rapper is lured out of the Garden of Eden before falling into hell where he dances for the devil.

Nike claimed trademark infringement in a statement which reads, “Nike has filed a trademark infringement and dilution complaint against MSCHF today related to the Satan Shoes. We don’t have any further details to share on pending legal matters,” the statement read. “However, we can tell you we do not have a relationship with Lil Nas X or MSCHF. The Satan Shoes were produced without Nike’s approval or authorisation, and Nike is in no way connected with this project.”

The “Satan shoes” are unofficial redesigns of Nike’s trademark Air Max 97 sneaker, and the suit claims that despite the various modifications made to the shoe — including adding a mixture of red ink and a drop of human blood to midsole — the shoes “still prominently display the Nike Swoosh logo.

“The material alterations include at least referring to the shoe as the Satan Shoe, adding red ink and human blood to the midsole, adding red embroidered satanic-themed detailing, adding a bronze pentagram to the laces, and adding a new sock liner,” states the complaint.

“There is already evidence of significant confusion and dilution occurring in the marketplace, including calls to boycott Nike in response to the launch of MSCHF’s Satan Shoes based on the mistaken belief that Nike has authorised or approved this product.”

Franklin Graham stated on Twitter: “The morals in this country have fallen so fast.”

South Carolina pastor, Mark Burns, tweeted that the shoe “is a reason why we Christians must be prayed up ready to battle in the spirit with the Voice of the Holy Spirit” and called the shoes “evil” and “heresy.”

Republican Gov. Kristi Noem of South Dakota too voiced her disapproval on Twitter.

“Our kids are being told that this kind of product is, not only okay, it’s ‘exclusive.’ But do you know what’s more exclusive? Their God-given eternal soul,” Noem wrote.

“We are in a fight for the soul of our nation.” 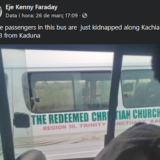 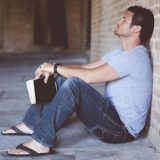