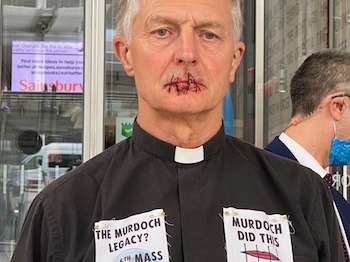 A retired member of the clergy sewed his lips shut today and stood outside the main entrance of News Corps UK offices at the Shard in London.

His aim was to draw attention to the silencing of climate science by Rupert Murdoch and News Corp, which has led to a catastrophic lack of effective action to tackle the climate crisis.

Revd Tim Hewes, 71, held placards including the words: ‘Murdoch muted climate science’, ‘Murdoch to the dock for ecocide’ and ‘The Murdoch legacy? The 6th Mass Extinction on planet earth’.

Revd Mark Coleman, 62, was also present and delivered a letter to the building for Ben Webster, Environment Editor at The Times, which asked Mr Webster to be courageous and to meet with them to discuss the situation. Revd Mark was informed that Mr Webster was not in the building today.

News Corp responded to the protest by refusing to engage with Revd Tim or Revd Mark and prevented others from engaging by directing people to their side entrance.

After two hours, Rev Tim Hewes chose to end his protest and remove his stitches.

Rev Tim, who is a Church of England priest in the Diocese of Oxford and a former dentist, made a video statement before he sewed up his lips, in which he said:

‘I’m sewing up my lips to demonstrate the terrible and violent havoc Murdoch’s actions have reaped upon the world and to symbolically make visible this truth. Today there are countless people throughout the world who are voiceless and suffering because of the climate emergency. Climate science and truth has been muted and those who suffer are not being heard. I have tried everything other way I can think of to end the influences and madness represented by Rupert Murdoch and his denial of the climate emergency.’

Mark, who is a Church of England priest in the Diocese of Manchester, said:

‘I am supporting Tim in his action because he is courageously drawing attention to the undue and distorting influence of Murdoch’s media. The truth that will set us free, not media spin and confusion.’

Co-founder of Christian Climate Action, Ruth Jarman, held the mirror up for Rev Tim as he sewed his lips. She told Premier News that it was a symbolic gesture:

“It was trying to sort of symbolically visualise the truth of what was happening. When Tim first mentioned to me that he was thinking of doing this, just the thought of it really shocked me. And then my second thought was, gosh, he really does think this is true, you know, sacrifices are having to be made. And people are sacrificing their lives in the developing world, and also in the first world now, because of climate change. I think we need to do bigger things, things that are commensurate with the seriousness of the situation to show people that there is really a problem out there and things need to change. And this is one of the ways of doing that.” 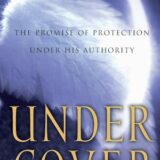 Next Story
Under Cover