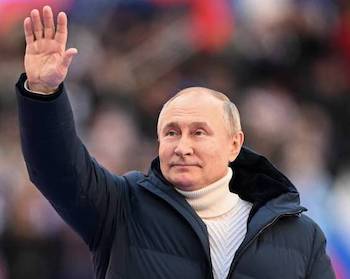 According to Russian officials, more than 200,000 people gathered Friday in and around Moscow’s Luzhniki Stadium, which has a seating capacity of 81,000. Attendees waved Russian flags marked with the letter “Z” and listened to patriotic songs, in an atmosphere one reporter called “very Wrestlemania.”

In Ukraine, Russian soldiers are fighting “shoulder to shoulder,” Putin said, adding, “We haven’t had such unity in such a long time.” He also promised to “bring to trial those who perpetrated numerous bloody crimes against civilians, including against citizens of the Russian Federation.”

Polling shows that a majority of Russians support the war in Ukraine, which has already left numerous Ukrainian civilians displaced, injured, and dead. Russia has repeatedly accused the Ukrainian government of committing genocide in separatist-controlled areas of eastern Ukraine.

Some forced to attend the rally

A BBC journalist who spoke to Russians waiting to enter the stadium reported that many people said they were being pressured by employers to attend. “I think most people here don’t support the war; I don’t,” said one man, a state worker who indicated he was forced to attend—and would stay only “for a while.” Some students told the BBC they were told they could go attend “a concert” to get a break from classroom lectures.

Russia’s Education Ministry recently sent schools some lessons related to heroes and patriotism. They include videos geared toward 12- to 15-year-old students, with references to Crimea as well as the ongoing war in Ukraine. One clip, according to the BBC, teaches kids that people who serve in the military are more likely to become national heroes.

Not all educators are on board with the suggested lessons, however. “I don’t like history being used for propaganda,” says one Moscow-area teacher told churchleaders.com. “I think this is dangerous, because there are a lot of children here who have relatives in Ukraine. This can provoke conflicts among children.” Another teacher says some of her students now consider war a type of adventure, so “I explained there’s nothing good in war.”

Putin identifies as a Russian Orthodox Christian but has expressed discomfort with speaking publicly about his faith.

Meanwhile, Russian forces are unleashing death and destruction on their Ukrainian brothers as they increase attacks on civilians. Accusations of war crimes are mounting against Putin as Russian troops persist in targeting Ukrainian civilians, bombing apartment buildings, shelters, and hospitals.

The main reason Russia invaded Ukraine was to bar it from joining the North Atlantic Treaty Organisation (NATO). Its forces invaded the country on Feb 24 by air, land and sea after Putin announced a “special military operation” in a televised address to his citizens. Putin lamented that his country could not feel “safe, develop and exist” over what he claimed was a constant threat from Ukraine.

“President Biden said his opinion, war crimes have been committed in Ukraine,” said US Secretary of State, Antony Blinken. “Personally, I agree. Intentionally targeting civilians is a war crime.” 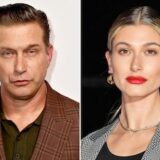 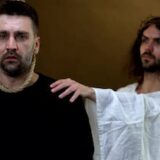 Next Story
Prayer for the apostates