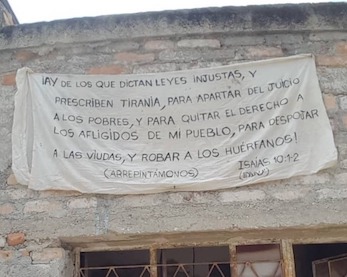 Christians are being urged to pray for a Cuban churchgoer who has been threatened with a prison sentence if he fails to take down a sign outside his house displaying a Bible verse.

Yuri Perez Osorio, from the Cuban capital La Habana, put a sign up in his front window containing a verse from the book of Isaiah which speaks about tyranny and justice.

The sign reads: “Woe to those who make unjust laws, to those who issue oppressive decrees, to deprive the poor of their rights and withhold justice from the oppressed of my people, making widows their prey and robbing the fatherless. Isaiah 10: 1-2,” and finishes with a call to repentance.

But earlier this week, Perez was summoned to a police station without a clear reason, his friend Yuriner Enriquez shared on Facebook.

In his post, Enriquez explained those who participated in last month’s nationwide anti-government protests were being called in by police, but said Perez did not attend the protests as he was self-isolating in hospital after his mother contracted Covid-19.

“I still don’t know what is happening or how they are treating him, nor do I know if they will let him return home, but I doubt very much that, if he doesn’t recant, they will let him go free. Only God can work such a miracle in the midst of this lamentable reality in Cuba,” Enriquez said.

In a later post, Enriquez gave an update on Perez’s situation and said he had been allowed to return home but had been given 72hrs to remove the sign otherwise he would be detained. However, he said Perez was determined to keep the sign up.

“Yuri was able to preach to all the officers there and only responded with the word of God. this further exalted the spirits of the officers, who could do nothing but threaten him, powerless. He remains firm in his conviction to leave the sign. We continue to pray.”

Christians in Cuba are continuously suffering persecution by authorities. Last month, three pastors were detained for taking part an anti-government protest. Two of them have been released but a third continues to be in prison. His family haven’t received an update about his welfare since he was arrested. 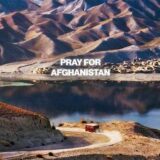 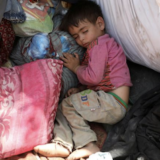