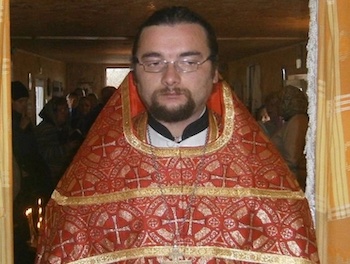 The priest was unarmed. He held a cross above his head as he ran out to confront invading Russian forces, possibly hoping to appeal to their moral instincts as fellow Christians to leave the small village alone. And yet, he was shot dead.

Fr. Rostyslav Dudarenko, a priest of the Orthodox Church of Ukraine, was assisting civilian volunteers manning a checkpoint at the entrance of their town, when he was killed on March 5, less than two weeks after the Russian invasion of Ukraine began.

As has been the case throughout the country, Ukrainian civilians have pitched in where they can, in order to support the Ukrainian military – far outnumbered by the invading forces.

Fr. Dudarenko, 45, was the parish priest in the village of Yasnohorodka, some 25 miles west of the capital, Kyiv. He and about a dozen others checking cars on their way into the village learned that three Russian tanks had driven through Yasnohorodka. An eyewitness told the BBC that the group of volunteers left the checkpoint to hide in the woods, ready to confront the tanks if necessary.

On the afternoon of 5 March, Fr Dudarenko, was at the Yasnohorodka checkpoint. His role was to check approaching vehicles. But like all military chaplains he was also there to offer the group spiritual support. He was dressed in civilian clothes.

As they approached the checkpoint, Russian troops started “firing in all directions,” said the eyewitness, whom the BBC identified with a pseudonym, Yukhym. “When they realised we were hiding in the grass, they went off road to run us over with tanks.”

Yukhym testified that when the tanks returned to the road, the priest, wearing civilian clothing, broke cover.

“I saw Rostyslav raise the cross above his head, get up from his hideaway, screaming something and walking towards them,” Yukhym said. “Perhaps he wanted to stop them. I tried to call him.”

Shots were then fired in Fr. Dudarenko’s direction. From Yukhym’s perspective, they appeared to be aimed directly at the priest. “And that was it,” he said. “He made just a couple of steps and fell.”

Yukhym, who was shot and injured in the attack, believes that everyone in the group would have been killed if Ukrainian military personnel had not arrived at that moment to push the Russians back. The BBC described the scene:

Eduard, who was stationed at a different checkpoint, arrived just as the Russian tanks were driving away to find bodies scattered on the road. He said these included Dudarenko and his assistant – who had also been unarmed – two other defense volunteers and another person he did not know.

As a priest, Dudarenko refused to bear arms, his friend, Fr. Serhii Tsoma, told the BBC.

“This made him particularly vulnerable when he decided to confront the tanks, but such an action was in his nature, according to eyewitness Yukhym,” the BBC explained.

“Rostyslav was a kind and optimistic person. I think that’s why he went to try and stop the Russians,” Fr. Tsoma said.

The killing of Fr. Dudarenko is one of thousands of potential war crime cases being investigated for future prosecution against Russia. Ukraine’s Prosecutor General, Iryna Venediktova, told the BBC that the country is in the process of documenting such incidents.

As of March 24, one month after the invasion began, Venediktova’s office has documented 2,472 cases.

If a case cannot be successfully prosecuted within Ukraine itself, “we will put our resources towards the International Criminal Court, so that a specific person, an individual, suffers the punishment,” she said.

Her office has created a website – warcrimes.gov.ua – to help document incidents such as the killing of Fr. Rostyslav Dudarenko.

According to the United Nations High Commissioner for Refugees (UNHCR), 1,035 civilians have been killed in Ukraine since the beginning of the invasion, and a further 1,650 injured. This number includes at least 90 children killed (as of March 24). Higher estimates, however, are provided by the Ukrainian side, according to which over 3,000 inhabitants died in Mariupol alone (including approximately 300 who had taken cover in the Drama Theater).

On March 16, the International Court of Justice in The Hague declared Russian aggression against Ukraine illegal and demanded an immediate end to it. The charges of Russia committing war crimes are pending before the International Criminal Court. 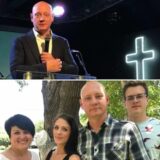 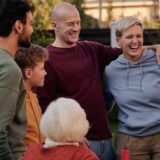