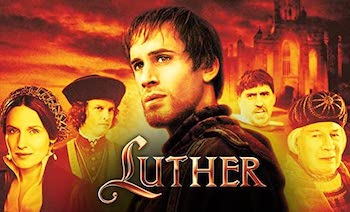 The story of Martin Luther, the Catholic priest who stood up to the Pope and the church hierarchy in the 1500s and was nearly killed for his beliefs, is dramatised in this powerful movie.

Possibly one of the most insightful, fascinating, and profound movies to come out in twenty years, Luther – played powerfully by Joseph Fiennes with his ascetic look and his tormented gaze, follows the turbulent struggle between the Catholic church and the country of Germany in the 1500’s, revolving around the greatest religious liberator of the middle ages, Martin Luther.

It covers most of the important events in his life and explains the impact of his ideas, which triggered the Protestant Reformation.

Both historically correct in many respects, as well as a fantastically well-written epic with an excessively well-rounded cast, the film offers a shocking glimpse into power and politics, as Cardinals attempt to bend and wrestle princes and monarchs to their side.

The film begins during a thunderstorm in 1505, as Luther is returning to his home. For fear of losing his life in the storm, Luther commits his life to God and becomes an Augustinian monk.

Two years later, Luther is a monk at St. Augustine’s Monastery in Erfurt. During his time at the monastery, he is constantly troubled by viewing God as a God of hate and vengeance. Martin is encouraged by Fr Johann von Staupitz, an elder monk who is his supervisor and mentor. Fr Staupitz tells Luther to look to Christ instead of at himself.

The film basically depicts Luther as a good Catholic priest, loyal to the Pope but horrified by the scandals and corruption that plagued the 16th century Church. He goes to Rome. There he buys indulgences for his grandfather, but he sees the reality – a corrupt Rome, sinful lifestyles of the church leaders and the sale of indulgences to finance the basilica of Saint Pedro.

Luther is constantly warned by his best friend Fr Spalatin (played by Benjamin Sadler) – who is secretary to the Prince.

He returns Germany where his guide and senior priest (Bruno Ganz) sends him to Wittemberg to obtain a doctorate in theology studies. He begins to teach his congregation that God is not a God of hate, but a God of love.

There appears John Tetzel (Alfred Molina), a dreadful inquisitor. Pope Leo X has become the new Pope of the Church and commissioned Tetzel to go throughout several communities, including Luther’s town, where he scares people into buying indulgences, which would be used to rebuild and renovate St. Peter’s Basilica in Rome, and to recover the Hohenzollern bribes to the Holy See.

Luther, who is already angry over the accumulated wealth of the church, is terribly offended. In his church, Luther denounces the indulgences, calling them “just a piece of paper”. His point of view about Catholicism has changed so much that he rebels and nails the 95 Theses on the door of the Castle Church in Wittenberg, Germany.

Luther’s Theses argues that the sale of indulgences was a gross violation of the original intention of confession and penance and that Christians were being falsely told that they could find absolution through the purchase of indulgences. The printing press has been recently invented by Guttemberg and the Luther’s ideas as well as his books are quickly printed and spread everywhere.

Luther is even more horrified when his effort to reform the Church gets out of control, is co-opted for political purposes and the Protestant Reformation becomes a popular revolution with attendant carnage and bloodshed.

Pope Leo X (Uwe Ochsenknecht) threatens Luther with ex-communication , but he refuses to recant. He is ultimately excommunicated by ¨Exsurge Domine¨, but he burns it in the public square of Wittemberg, where the 95 Theses famously appeared. He is appointed in Worms (1521) in the presence of the emperor Charles V (Liebrech), but he doesn’t regret his decisions. Prince Frederick of Xaxony (Peter Ustinov) keeps him protected in his castle of Wartburgo.

There, Luther translates the Bible into German language for ordinary people to understand the New Testament . The common people follow his lectures, tired of the Catholic Church’s penury. Luther is finally charged as a heretic priest and has to face the ruling Cardinals and some Catholic princes; he urges them to make the Scriptures available to the common believer and to lead the Church toward faith through justice and righteousness .

Meanwhile, Luther meets a former nun named Katherina Von Bora (Claire Cox) and marries her. The emperor summons all the German princes for confronting Luther’s doctrine. The princes encourage and contend the great emperor of the Holy Roman-German Empire, as they stand up against Charles V. Luther’s theses have finally won.

The core of actors all deserve Oscars for their performances, particularly Fiennes, Firth, and Ustinov.

It is a pleasure to see Joseph Fiennes conform to an astonishingly strong, charismatic man who is not faultless, but instead human. The costuming, visual effects and writing are all fantastic. The dialogue is unusually rich, spattered with direct quotes from Luther’s literary works.

In the film appears famous historical characters who are well performed by a sensational plethora of British and German actors such as Fiennes, Bruno Ganz (Hitler in The Downfall), Alfred Molina (Diego Rivera in Frida) and Peter Ustinov (the immortal Nero in Quo Vadis)

The movie gets a colourful cinematography by Robert Frasse , as well as an evocative musical score by Richard Harvey and being perfectly directed by Eric Till. Devotees of the history will love this movie which is a fine tribute to the Reformation.

The best thing about “Luther” is the quality of the filmmaking. A lot of money was poured into this production, leaving Christian films like Megiddo and Left Behind in the dust. Not only will this receive greater recognition as a “serious” movie, it will also attract larger audiences due to the quality, budget, massive locations, and cast list.

The film ends with the following words:

What happened at Augsburg pushed open the door of religious freedom. Martin Luther lived for another 16 years, preaching and teaching the Word. He and Katharina von Bora enjoyed a happy marriage and six children. Luther’s influence extended into economics, politics, education and music, and his translation of the Bible became a foundation stone of the German language. Today over 540 million people worship in churches inspired by his Reformation.

Luther’s goal – to bring God to the people and to take money, fear, and shame out of the equation – made him a reformer to some, a heretic to others. Even when threatened with violent death, Luther refuses to back down, sparking a bloody revolution that shakes the entire continent to its core.

Secular audiences will get an open story of salvation. Christian audiences will have the pleasure of finally having a hero to root for in the cinema, a man who stands up for his simple faith in God, against all odds. 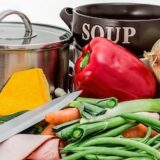 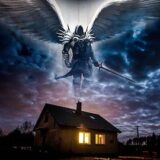 Next Story
Blessing prayer for your home