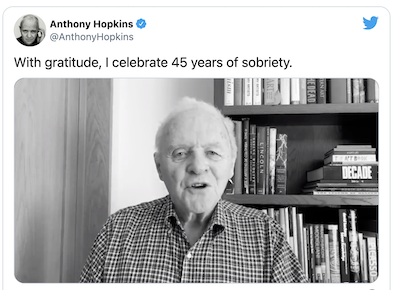 In 1975, a woman asked him at an Alcoholics Anonymous meeting, “Why don’t you just trust in God?” Hopkins admits that he was at such a point of desperation that he thought, ‘Well, why not?’.

As he recalls his addiction and powerlessness to change on his own, he tells of a small inner voice that asked him to choose: life or death.

After turning to God, his destructive desire for alcohol disappeared.

Aware of the grief many have experienced throughout 2020, Hopkins encouraged today’s youth in a brief video on social media, while reflecting on the message he heard 45 years ago that changed his life.

Sir Anthony posted a video to Twitter, saying 2020 had been a year “full of grief and sadness” but urging those struggling not to give up. The video has gone viral, garnering over 8.7 million views.

He said: “45 years ago today, I had a wake-up call. I was heading for a disaster, I was drinking myself to death. I’m not preachy but I got a message, a little thought that said, ‘Do you want to live or die?’ And I said, ‘I want to live’ and suddenly the relief came. And my life has been amazing.

“I have my off days and sometimes little bits of doubt and all that but all in all I say, hang in there.

“Today is the tomorrow you were so worried about yesterday. You young people, don’t give up, just keep in there, just keep fighting. Be bold and mighty forces will come to your aid. That sustained me through my life.”

He added: “Happy New Year – this is going to be the best year.”

The Oscar-winning actor, 82, battled alcoholism during his early career, going teetotal following a talk with a woman from Alcoholics Anonymous in December 1975.

He said the woman asked him, “why don’t you just trust in God?” and from then on the urge to drink was “never to return”.

Welsh-born Sir Anthony, one of the most gifted actors of his generation, is perhaps best-known for playing cannibalistic serial killer Hannibal Lecter in 1991’s The Silence Of The Lambs, for which he won the Academy Award for best actor.

He discussed his alcoholism during a speech with students near his home in California in 2018, reflecting how drinking marred his early career.

He said: “Because that’s what you do in theatre, you drink. But I was very difficult to work with, as well, because I was usually hungover.”

Sir Anthony added he had been “disgusted, busted and not to be trusted” while he was drinking.

The actor, who played Pope Benedict XVI in The Two Popes, was once an atheist, but turned to God during his addiction. This change of heart was revealed in an interview with Piers Morgan who asked him if he believed in God to which Hopkins replied wholeheartedly: “Yes, I do. I do.”

From the moment God helped Hopkins manage his addiction, his career went from strength to strength, with roles such as Hannibal Lecter in The Silence of the Lambs and impressive performances in Shadowlands and The Remains of the Day. 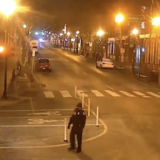