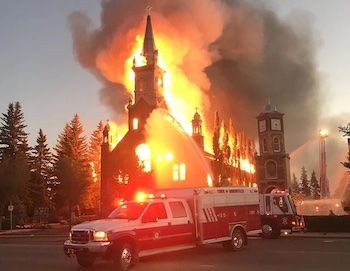 Ten Catholic churches in the Canadian State of Alberta have been burnt down in attacks that police have linked to the discovery of unmarked indigenous graves near former Catholic-run schools.

On June 26, St. Ann’s Catholic Church, which is built on Upper Similkameen Indian Band land, mysteriously caught fire. Within an hour, another fire outbreak was reported from Chopaka Catholic Church on Lower Similkameen Indian Band land. Sacred Heart Church and St. Gregory’s Church, located in Canada’s Okanagan area, caught fire on June 21 last month. Both of them were burnt to the ground.

Father Sylvester Obi Ibekwe said, “The Sacred Heart Church is gone. All I could see were ashes, ruins, rubbles. How could that be? What happened? What can I do now? I felt helpless and powerless.”

St. John Baptiste Parish in Morinville, in northern Alberta and north of Edmonton, was burnt down just after 3 a.m. The fire was so strong that firefighters were unable to enter the 114-year-old building and the roof collapsed a short time later. Earlier in the week, in Gleichen, Alberta., east of Calgary, there was potential attempt to set the Siksika Catholic Church on fire after midnight. Also in Edmonton Alberta, a statue of Pope John Paul ll outside of Holy Rosary Catholic Church was painted red. The base of the statue had dozens of red-painted hand prints representing the Church’s indigenous child victims and the former pope’s name was smeared with red paint.

The police have so far not made any arrests in the case.

More vandalism has been reported – investigators in the province said orange and red paint was daubed on the churches in the city of Calgary.

The premier of Alberta said the attacks were “appalling”. It comes after unmarked graves were found around former church-run residential schools that indigenous children were once forced to attend.

A third site containing 185 graves with human remains was found near Cranbrook, British Columbia, on Wednesday, bringing the total number of unmarked burial sites to just over 1,000.

The grim discoveries prompted some calls for national celebrations in honour of Canada Day on 1 July to be cancelled.

Alberta’s Premier Jason Kenney, said on Thursday one of the vandalised locations was an African Evangelical Church in the city of Calgary.

From the 1800s until the 1970s, more than 150,000 indigenous children were forced to attend state-funded Christian boarding schools in an effort to assimilate them into Canadian society. Thousands of children died of disease and other causes, and many never returned to their families.

The discoveries have prompted a wave of alleged arson attacks, that for the leaders of the Lower Similkameen Indian Band, an indigenous group, reflect “the grief and the rage” felt by many.  However, they have called for people to “deal with these emotions in a more healing way”.

“This is a symptom of the intergenerational trauma our survivors and intergenerational descendants are experiencing, there are supports to help deal with these emotions in a more healing way,” the group wrote in a statement.

Jason Kenney, Alberta’s head of government, took to Twitter to express his disappointment with the church attacks.

“The vandalism of Churches across Alberta is appalling”, he said.

“This happened today at an African Evangelical Church in Calgary. The congregation is made up entirely of new Canadians, many of whom came here as refugees fleeing countries where Churches are often vandalised & burned down.

“These folks came to Canada with the hope that they could practice their faith peacefully. Some of them are traumatised by such attacks. This is where hatred based on collective guilt for historic injustices leads us. Let’s seek unity, respect & reconciliation instead,” he tweeted together with a picture of the church’s door painted with orange and red hands over it.

Calgary police said in a statement it was investigating the attacks and said “handprints, the number ‘215’ and other markings suggest the vandalism was in response to the graves recently found at former residential schools.”

It went on to say that the police department “is committed to doing our part in this reconciliation effort” but urged the community not to turn to vandalism as “it is not just illegal, but it [also] serves to create further division, fear and destruction in our city.” 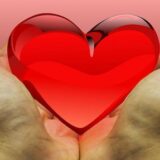 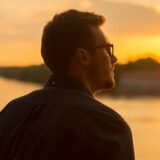