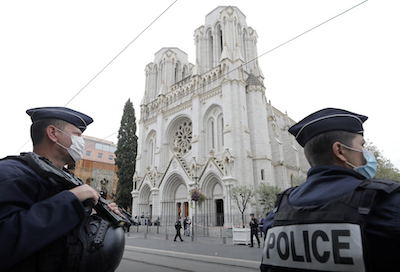 A knife-wielding Tunisian man beheaded a woman and killed two other people in a church in the French city of Nice on Thursday before being shot and taken away by police.

President Emmanuel Macron said France would deploy thousands more soldiers to protect important sites such as places of worship and schools, as the country’s security alert was raised to its highest level.

Speaking outside the church, Macron said France had been attacked “over our values, for our taste for freedom, for the ability on our soil to have freedom of belief … And I say it with great clarity again today: We will not give any ground.”

Church sexton had throat slit while preparing for Mass

As he did every day, Vincent Loques, sexton of the Notre Dame church in the French city of Nice opened up the doors around 8:30 a.m. There were few people around; the first Mass of the day was not due to start for another two hours.

But soon after he started work on Thursday morning, a Tunisian man armed with a knife entered the church and, over the course of 20 minutes, slit the 55-year-old sexton’s throat, beheaded a 60-year-old woman, and badly wounded a third woman who was 44, according to prosecutors.

The sexton and the older woman died on the spot, while the younger woman managed to make it to a cafe across the street, where she died from her wounds, France’s chief anti-terrorist prosecutor Jean-Francois Ricard said later.

Ricard said the suspect in Thursday’s attack was a Tunisian man born in 1999 who had arrived in Europe on Sept. 20 in Lampedusa, the Italian island off Tunisia that is the main landing point for migrants from Africa.

A Tunisian security source and a French police source named the suspect as Brahim Aouissaoui.

According to a timeline provided by Ricard, the attacker stayed in the station for 26 minutes, during which he turned his coat inside out and changed his shoes.

At 08:13, he set off to walk the 400 metres to the Notre Dame church, in a tree-lined square just off Nice’s main shopping thoroughfare.

He entered the church at 8:26 a.m., said Ricard, citing evidence from video surveillance, and began his attack, using a 30 centimetre long knife.

When police later examined the scene, they found the attacker had brought two spare knives which he did not use, along with a copy of the Koran, and two telephones.

The 44-year-old woman who fled to a nearby cafe raised the alarm before dying, Ricard said. Police then arrived and confronted the attacker, still shouting “Allahu Akbar”, and shot and wounded him.

“On the attacker we found a Koran and two telephones, the knife of the crime – 30cm with a cutting edge of 17cm. We also found a bag left by the attacker. Next to this bag were two knives that were not used in the attack,” Ricard said.

The suspect is in hospital in critical condition, he said.

The attack came just under two weeks after a middle-school teacher in a Paris suburb was beheaded by an 18-year-old attacker who was apparently incensed by the teacher showing a cartoon of the Prophet Mohammad in class. 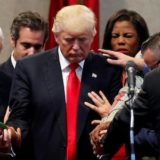 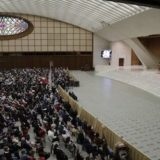