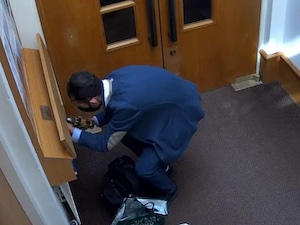 A well-dressed thief has been caught on CCTV attempting to steal money from a church donations box.

The man was captured entering St Anne’s Church in Soho just gone eight o’clock in the morning armed with a screwdriver. He was seen dismantling the box and making off with £15.

Unsatisfied with his takings, however, he returned a week later with an electric screwdriver in hand.

Rev Simon Buckley, Rector of St Anne’s, said, “We have a small donations box mostly for people putting in, you know, a couple of pounds in. And we were just surprised one day to see that the back of the front of it had been unscrewed. There’s a little chute that has a panel, and we noticed it was had been removed, which we thought was a bit odd”.

He added, “So we looked on the CCTV cameras, and somebody comes in bold as brass at about ten past eight in the morning, looks into the chapel, crosses himself, and then turns around and without any thought pulls out a screwdriver, unscrews it and goes off with 15 pounds”.

“So we put it back thinking it was a kind of isolated incident. And then a week later reported it to the police. A week later, we notice again that this panel had come off, check the CCTV and the same person has come back, but this time with an electric screwdriver!

“We don’t get that sort of thing happening very often, we do get a number of people who across the week, you know, who will come to us for help in different in different forms.”

Rev Buckley said that they had placed a sticker on the donations box that reads “if you are in need, please ask for our help rather than steal from us”.

“We don’t want to get into the situation that the minute that we see somebody with a screwdriver down there, one of us rushes down and says ‘don’t do that, here’s a ten-pound voucher for Tesco. That would be slightly odd as well.”

He added: “One of the things that we pride ourselves on is being a church that is open and accessible to people. And the downside of being open to people is that sometimes they will take advantage of you.”

Rev Buckley added that the theft had been reported to the police, who were “shocked” but stated that it was a case of “low-level theft”.

The vicar posted a picture of the thief on Facebook, but made sure not to show his face to protect him from being “named and shamed”.

Rev Buckley encouraged people who are in need to “have the courage to ask for help”.

“Our responsibility is to signpost people to where they can get help.” 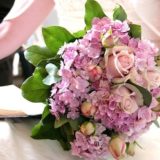 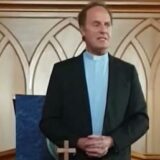 Next Story
Vicar dies at his church