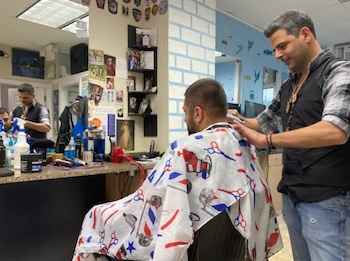 Now a barber for eight years, Elsayah converts the hearts of many with his own miraculous conversion story.

From their chair at Chris and Sam’s Barber Shop, his customers have a clear view of pictures of the Image of Divine Mercy, St. Charbel Makhlouf, and St. Pio Pietrelcina, as well as multiple images of the Blessed Virgin Mary.

Mark Farah, a candidate for seminary, told CNA that one year after sitting in Elsayah’s chair at the barber shop, he has moved from living as a “secular” college student to now awaiting admittance to the seminary for the Marian Fathers of the Immaculate Conception.

“If I hadn’t heard Elias’ story of God’s mercy and grace, I believe I would still be living a sinful life,” Farah said.

Matthew Lima said that the first time he sat in Elsayah’s chair at the barber shop as a young man struggling with his faith, Elias preached to him about the power of the rosary.

“I will admit after sitting on his chair and listening to his words and how it helped his life I thought I will give it a try,” Lima told CNA. “I did and I felt so much better praying on the rosary and just carrying it around with me at all times to keep my faith and my mind at ease.”

Chadi Matta, Elsayah’s friend and co-worker, told CNA that although Elsayah is now committed to his faith, he once lived a much different life.

“Elias was a womanizer,” said Matta. “Everyone either knew him or knew of him.” He recalled how Elsayah, now 43 years old, would bring countless women to his house and lived a reckless lifestyle.

“I remember going to his apartment where he had two friends living with him,” Matta told CNA. “I thought they were living life with no rules. I always heard them talking about girls and the party life they had.”

Elsayah, who emigrated from Lebanon to the United States at 27 years old, said he was making money in sinful ways for ten years. He said that his first steps back towards the Church happened when a friend introduced him to the homilies of a priest in Lebanon, Fr. Ralph Tanjar.

“The first time I listened to the priest’s homily, he was focusing on confession and what happens when people don’t go to Mass and confession,” Elsayah said. “So, it touched my heart a little bit, and I started getting curious.”

Elsayah, who had never received any sacraments except for Baptism, began to listen to Fr. Tanjar’s homilies. Then, a friend gave him a book by St. Alphonsus Liguori on the Blessed Virgin Mary.

“So, I started reading it and I started praying the rosary little by little because in his homilies he concentrated on the rosary a lot,” Elsayah said of St. Alphonsus.

When Elsayah was 34, he went out to clubs with some of his friends and was assaulted on the head with a metal bat. Matta told CNA he remembered getting a call from Elias’ friend that night he had been hospitalized in the intensive care unit.

“The sight of him in the bed unconscious, the bandages, the machines all terrified me,” Matta said.

Before going unconscious, Elsayah said he surrendered his life to the Lord while being rushed into the hospital. Elsayah told CNA that the doctors miraculously found no internal bleeding in the MRI scan.

“It was all drug-related,” Elsayah said of the attack. “This guy wanted to kill me.”

When Elsayah turned 35, he recalled one scary afternoon where he felt glued to his bed and smelled repulsive fumes. He said he lost the ability to move and speak.

“I wanted to scream. I couldn’t. I got scared,” he said. “And I looked up, and saw three devils above my head with black fumes. It’s hell!” Elsayah prayed to the Virgin Mary and begged for her help. “As soon as I said her [Mary’s] name, it was gone and disappeared,” he said.

Elsayah said the experience reflected the grave state of his soul. His disgust of his sins moved him to make his first confession, which lasted four hours. Elsayah marked the confession as a turning point in his faith life, but noted that he still carried the effects of many sins with him.

Over the next four years Elsayah said he began to cling to the rosary and the sacraments.

At age 39, Elsayah attended a Mass by visiting priest Father Saliba Kozah, from Our Lady of the Cedars of Lebanon parish in Boston. Kozah, who passed away in February 2021, was a well-known priest in Lebanon and in the local Maronite community.

Elsayah noted how he was not supposed to be at the Mass that day because of a fishing trip he had planned with his friend.

“My friend says don’t go on the trip, there’s a monk coming from Lebanon and he’s a saint. You’ll only see men like this once in your lifetime,” Elsayah told CNA.

Elsayah wanted to go on the fishing trip “but something in my head told me don’t go,”  he said. “So, I cancelled my trip and I went to the church.”

Elsayah told CNA that during an event after the Mass, he asked Kozah a question on confession. Elsayah said Kozah replied by yelling, “You! You need to confess again!”

Elsayah told Kozah that he had confessed the previous week. Kozah responded, telling Elsayah that he committed the same sin again. Elsayah claimed that Kozah “read his soul,” although at the time he was embarrassed and wondered why he was the only one present to be called out by the priest.

Elsayah said he felt humiliated and questioned to himself “Why in front of all these people? Why Lord?” Kozah responded, “Don’t be embarrassed. Be happy. The Holy Trinity told me about you.”

Elsayah told the priest in confession that he was living in sin with a woman to whom he was not married. He said that Kozah replied, “This woman, she’s your sister in Christ. You’re not allowed to touch her until you’re married to her in the Church.”

“Fr. Saliba told me ‘if you die you’ll go straight to hell. No salvation, don’t let anybody fool you.’ Then, he gave me absolution,” he said.

Elsayah said that this confession changed his life forever. He began pursuing a life of purity, and his relationship with his girlfriend ended. He said his obsession with women was overcome through the grace from confession.

His own conversion story has spurred others to change their own lives. Rob Canfield told CNA that he was undergoing a midlife crisis as a 56-year-old father of four when he met Elsayah.

Canfield said that hearing Elias’ story at the barber shop helped him better appreciate his faith. “Elias is unwavering in his trust in the Word and there is a peace in that trust that I am still learning to appreciate,” Canfield said. 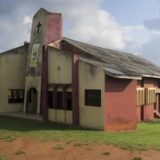 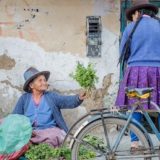