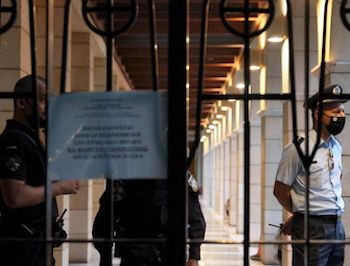 A priest has been arrested in Athens after he threw acid on seven bishops of the Greek Orthodox Church, police say.

The priest had brought “large bottle of corrosive liquid” to the session at the Petraki Monastery in central Athens.

The priest threw acid at the seven bishops who were meeting to discuss defrocking him – stripping him of his priesthood – after he was allegedly discovered to be in possession of 1.8 grams of cocaine in June 2018, according to local media.

Witnesses say the 37-year-old priest took a bottle out and started spraying the bishops just as they were announcing the verdict. The seven senior members suffered burns on their faces and hands. A police officer who helped detain the subject, a lawyer who was present at the meeting and a clergyman were also injured during the attack. A guard, who managed to catch the priest at the gate of the monastery, also suffered burns and was taken to hospital.

Bishop Artis Kallinikos, one of the victims,  told media persons that he first thought the liquid was holy water.

“He had the bottle in a bag. When I saw him take out the bottle, my first thought was that it was holy water. My mind did not go elsewhere. I quickly realised, from the sting in my eyes, the liquid was a caustic liquid because it was immediate. Another bishop’s face changed colour as soon as the liquid fell on him.”

Health Minister Vassilis Kikilias said four out of the seven bishops were lightly injured while the other three needed special eye treatment and plastic surgery. They have all now been discharged from hospital.

A police spokesperson said the attacker has been moved to a psychiatric hospital and remains under police guard. He was expected to testify during a court hearing, but the judge decided to postpone it as authorities believe he is not in a good state of mind to testify.

Mr Mitsotakis said he was “deeply sad” and assured the bishop that “the state will offer all possible medical assistance for the victims’ speedy recovery”.

Official charges have not been filed as the police case is yet to be sent to the prosecutor’s office. 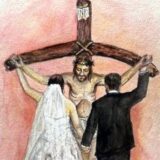 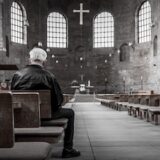