A woman from Bournemouth who was recently praying quietly with a friend in a public space was warned by local authorities that their prayer could cause “intimidation, harassment or distress”, and was asked to move away.

In this town on the south coast of England, in 2022, making the Sign of the Cross and praying in a certain public area is now illegal. The council authority of Bournemouth has designated an area around a local abortion facility a “safe zone.” Within that “zone,” anyone found praying, making the Sign of the Cross, reciting Scripture or sprinkling holy water will be fined £100 (about $113). The Public Spaces Protection Order (PSPO) — the legal means by which the “zone” is created — came into force on Oct. 13. It shall remain in place for three years, during which it forbids a number of behaviours from Monday to Friday between 7am and 7pm, namely, “vigils where members audibly pray, recite Scripture, genuflect, sprinkle holy water on the ground or cross themselves if they perceive a service-user is passing by.”

With support from Christian legal group ADF UK, Livia Tossici-Bolt has filed a complaint against Bournemouth Council for breaching her freedom to pray on a public street.

She said the officers told them were praying close to the edge of the new buffer zone set up around a local abortion clinic. The zone, in force due to a Public Spaces Protection Order bans activities such as praying, protesting, vigils and handing out leaflets.

Ms Bolt’s reaction to officers telling them to move was: “Everyone has the freedom to pray quietly in a public place. I would never dream of doing something that causes intimidation and harassment.

“We complied with the new rules instituted by the council and didn’t pray within the censorship zone.

“Yet nevertheless, these prayer-patrol officers tried to intimidate us out of exercising our freedom of thought and of expression in the form of prayer -which has been a foundational part of our society for generations.”

ADF’s Lois McLatchie told Premier that she believes buffer zones should be removed: “Everybody in the UK should be free to pray wherever they are and in a free country, that’s very much the expected norm but that wasn’t the case for Livia.

“I think there has to be a recognition that buffer zones are a hindrance and they’re detrimental to the well-being of women and also to our fundamental freedoms in the United Kingdom.

“We know from reviews that have been carried out by the government itself, that most activities that take place outside of abortion facilities by pro-lifers are either prayer or handing out leaflets about charity or support available for women should they wish to continue their pregnancy.

“Hundreds of these women have taken advantage of this offer and been grateful to have that extra choice given to them in a situation where it felt perhaps they had no choice but to the abortion.

“Taking away that help, and censoring that space around an abortion facility is detrimental to that offer of help.”

The UK Government is now considering rolling out buffer zones across the UK. McLatchie wants people to pray for this situation to be reversed: “That’s a piece of legislation that’s going through the parliament, even as we speak.

“There’s debate surrounding that. So it’s important to be praying the politicians have the wisdom at to be looking at this legislation for what it is, it’s a piece of legislation that bans people from even expressing opinion or advice in the facility in the abortion clinic.

“So pray the parliamentarians will be wise to this and that they will not implement this very severe censorship that would be harmful to women and two pro-life volunteers to.”

A BCP Council spokesperson said: “The Anti-Social Behaviour (ASB) team has received complaints from residents which were in relation to people present on the boundary of the PSPO safe zone in close proximity to a local school. They were holding signs targeted at women visiting the clinic.

“Our Community Safety Accreditation Scheme (CSAS) officers engaged with those individuals to provide words of advice and asked them to move to an alternative location, due to the complaints received. Should we continue to receive ongoing complaints about the detrimental impact the reported behaviours are having on the community our Anti-Social Behaviour team will undertake investigations to determine the most appropriate action to deal with the complaints.

“The PSPO (Public Space Protection Order) came into effect on Thursday 13 October 2022 in the area directly surrounding the BPAS Clinic on Ophir Road, Bournemouth. It will be in operation Monday to Friday, between the hours of 7am – 7pm, to cover the opening times of the clinic. It is an offence to fail to comply with the order and could result in a fine or prosecution.

“Activities prohibited with the PSPO area include (but are not restricted to) protesting abortion services, handing out leaflets, intimidating visitors to the clinic or its staff, photographing or recording the clinic’s users or holding vigils.” 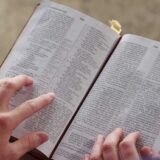 Next Story
Most popular Bible verse