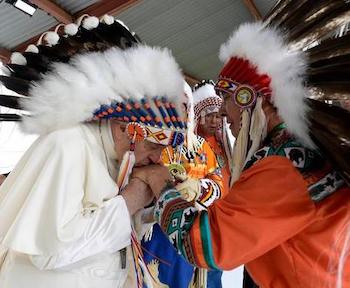 Before the ceremony began, the pontiff took a lap around Clarke Field in the Popemobile, a converted Jeep Wrangler, waving to fans and parishioners and stopping to kiss a few babies along the way.

“Today, we celebrate the feast of the grandparents of Jesus,” the pontiff said as he began his homily.

As the Pope began to close the ceremony, thousands in attendance rose to their feet applauding in recognition of the “enormous, personal effort” of the Holy Father’s trip to Canada to apologise for the Catholic church’s role in residential schools – a source of trauma to many Indigenous people.

Pope Francis on Monday had apologised for the “evil” inflicted on the Indigenous peoples of Canada on the first day of a visit focused on addressing decades of abuse at Catholic-run residential schools.

The gathering marked the first leg of the pontiff’s “penitential pilgrimage,” a six-day trip to Canada aimed at expressing regret for the Catholic Church’s role in schools meant to assimilate Indigenous children and where thousands were subjected to serious abuse.

The plea for forgiveness from the leader of the world’s 1.3 billion Catholics was met with applause by a crowd of First Nations, Metis and Inuit people in Maskwacis, in western Alberta province – some of whom were taken from their families as children in what has been branded a “cultural genocide.”

“I am sorry,” said the 85-year-old pontiff, who remained seated as he delivered his address at the site of one of the largest of Canada’s infamous residential schools – where some 150,000 Indigenous children were sent as part of a policy of forced assimilation.

“I humbly beg forgiveness for the evil committed by so many Christians against the Indigenous peoples,” said the pope, citing “cultural destruction” and the “physical, verbal, psychological and spiritual abuse” of children over the course of decades.

Francis spoke of his “deep sense of pain and remorse” as he formally acknowledged that “many members of the Church” had cooperated in the abusive system.

As he spoke the emotion was palpable in Maskwacis, an Indigenous community south of provincial capital Edmonton that was the site of the Ermineskin residential school until it closed in 1975.

Indigenous leaders present at the meeting with Francis accepted the church’s apology, many welling up with emotion, but said their people expect him to take further steps toward reparations.

Several hundred people, many in traditional clothing, were in attendance, along with Canadian Prime Minister Justin Trudeau and Mary Simon, the country’s first Indigenous governor general.

Many lowered their eyes, wiped away tears or leaned on and hugged neighbours, and Indigenous leaders afterwards placed a traditional feathered headdress on the pope.

Counsellors were waiting near teepees set up to provide support to those who may need it, and earlier volunteers had distributed small paper bags for the “collection of tears.”

“The First Nation believes that if you cry, you cry love, you catch the tears on a piece of paper and put it back in this bag,” explained Andre Carrier of the Manitoba Metis Federation, before the pope spoke.

Volunteers will collect the bags and later they will be burned with a special prayer, “to return the tears of love to the creator,” he said.

From the late 1800s to the 1990s, Canada’s government sent about 150,000 children into 139 residential schools run by the Church, where they were cut off from their families, language and culture.

Many were physically and sexually abused by headmasters and teachers, and thousands are believed to have died of disease, malnutrition or neglect.

During a ceremony performed before the pope spoke in Maskwacis, Indigenous people carried a bright red 50-meter long banner on which the names – or sometimes only the nicknames – of all the children known to have died were written in white. There were 4,120 of them, officials said.

Since May 2021, more than 1,300 unmarked graves have been discovered at the sites of the former schools, sending shockwaves throughout Canada – which has slowly begun to acknowledge this long, dark chapter in its history.

A delegation of Indigenous peoples traveled to the Vatican in April and met the pope – a precursor to Francis’ trip – after which he formally apologised.

But doing so again on Canadian soil was of huge significance to survivors and their families.

Later in the day, at 4:30 pm (2230 GMT) Francis will travel to the Sacred Heart Catholic Church of the First Peoples in Edmonton, one of the city’s oldest churches, for a second speech to Indigenous communities.

The flight to Edmonton was the longest since 2019 for Francis, who has been suffering from knee pain and was forced to use a wheelchair on the Canada trip.

The papal visit, though highly anticipated, is also a source of controversy for some.

“It means a lot to me” that he came, said Deborah Greyeyes, 71, a member of the Muskeg Lake Cree Nation, the largest Indigenous group in Canada.

“I think we have to forgive, too, at some point,” she told AFP. But “a lot of stuff was taken away from us.”

After a mass before tens of thousands of faithful in Edmonton on Tuesday, Francis will head northwest to an important pilgrimage site, the Lac Sainte Anne.

Following a July 27-29 visit to Quebec City, he will end his trip in Iqaluit, capital of the northern territory of Nunavut and home to the largest Inuit population in Canada, where he will meet again with former residential school students, before returning to Italy. 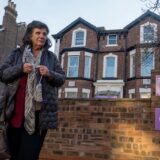 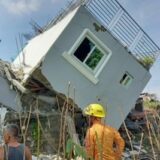