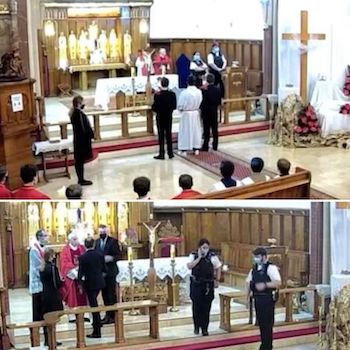 A service in south London was broken up by police officers over apparent breaches of Covid-19 regulations.

An officer told the congregation that they could be fined £200 or arrested for the potential rule-breaking, “This gathering is unfortunately unlawful under the coronavirus regulations we have currently. I suggest, ladies and gentlemen, that though it is Good Friday, and I appreciate you would like to worship, that this gathering is unlawful, so please may you leave the building now. Thank you.”

In a letter to parishioners on its website, the Polish Catholic church said that it had complied with the order to close the service and for people to go home, but insisted it had met all government requirements.

The church said, “We believe, however, that the police brutally exceeded their powers by issuing their warrant for no good reason.”

The church is in touch with the Polish Catholic Mission of England and Wales and the police about the incident and were waiting for a more detailed explanation.

In guidance issued to churches before Holy Week, which encompasses the Easter celebrations, the Catholic Bishops’ Conference of England and Wales had said: “Care should be taken for the numbers of people present for this liturgy, which is very popular with the faithful. If necessary, additional celebrations can be considered, taking into account the risks associated for the faithful in travelling to and from church.”

A spokesman for Met Police said, “At around 1700hrs on Friday, 2 April, officers were called to a report of crowds of people queuing outside a church in Balham High Road”.

“Officers attended and found a large number of people inside the church. Some people were not wearing masks and those present were clearly not socially distanced. We are particularly concerned about the risk of transmission of the Covid-19 virus as a result of large indoor gatherings at which people are not socially distanced and some are not wearing masks. As such, officers made the decision that it was not safe for that particular service to continue.” 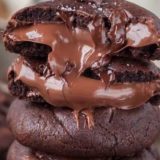 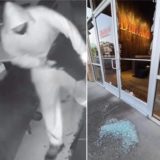 Next Story
US man offers job to burglar