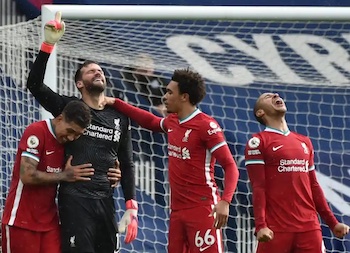 Liverpool footballer Alisson Becker has thanked God following the bizarre events that saw him become only the sixth goalkeeper ever to score in the Premier League.

Alisson scored the 95th-minute winner at West Bromwich Albion. The emotional Brazilian, who lost his father in a drowning accident in February, dedicated the first goal of his senior career – a fine, glancing header – to his family as he said: “God put his hand on my head today”.

With his club needing to win against West Bromwich Albion and seconds to go, the goalkeeper ran the length of the field to give his side an extra chance to score from a corner kick.

The win means Liverpool remain in the hunt for qualification for the Champions League.

“You can’t explain a lot of things in life,” Alisson, who’s a committed Christian, told Sky Sports after the match, dedicating his goal to his father, Jose Agostinho Becker.

“The only answer for me is God; He put His hand on my head today and allowed this to happen.

“With my father, I hope he was here to see it, but I’m sure he was seeing, with God at his side, celebrating.”

“I’m too emotional, with everything that’s happened in my life recently with my family: football is my life, from since I remember with my father. I hope he was there watching and celebrating,” said Alisson. “Sometimes we [Liverpool] have been doing things and it’s not been working. The Champions League is so important to us and I’m so happy I am able to help.

“I looked over the bench, didn’t get anything, then John [Achterberg, goalkeeping coach] shouted with conviction to head up. I think it is the best goal I have ever scored”.

The surprise match winner comes after a difficult start to 2021 and because of the pandemic, he’s been unable to be with his family.

Alisson previously has spoken openly about his Christian faith. After his club won the Champions League in 2019, he revealed a t-shirt which read ”the cross = love’.

In 2020 Alisson was involved in the baptism of his team mate Roberto Firmino. Pictures of the event were shared hundreds of thousands of times on social media.

Alisson spoke of the importance of qualifying for the Champions League even as he reflected on what he has been through this spring when Klopp withdrew him from the team after his bereavement.

Liverpool has kept alive their dreams of qualifying for the Champions League under these remarkable circumstances.

Jürgen Klopp claimed a partial assist for “the technically insane” goal that came after Mohamed Salah, moving level on 22 goals with Harry Kane in the chase for the Premier League’s golden boot, had cancelled out Hal Robson Kanu’s opener for West Brom. “I saw Ali starting to go forward,” said Liverpool’s manager. “My part in the goal is that I didn’t shout for him to stay back!”

“We are really close so I know exactly what it means to him [Alisson] and what he thought in that moment, it’s touching,” Klopp added. “It’s only football but it means the world to us. Now we need to keep going and make sure we are ready for Burnley.”

The entire Liverpool team huddled around Alisson after the 28-year-old rushed upfield to glance Trent Alexander-Arnold’s inswinging corner into the far top corner.

Klopp said: “The way his teammates [celebrated] showed today how much they care for him. He’s a wonderful, wonderful person: funny, smart, thoughtful, intense in moments. He’s just a great guy. [After all he’s been through] a special moment like that couldn’t have happened to a better person.” 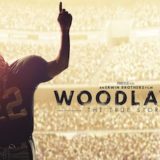 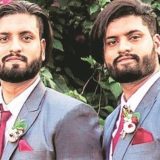 Next Story
Twins die of Covid in Meerut