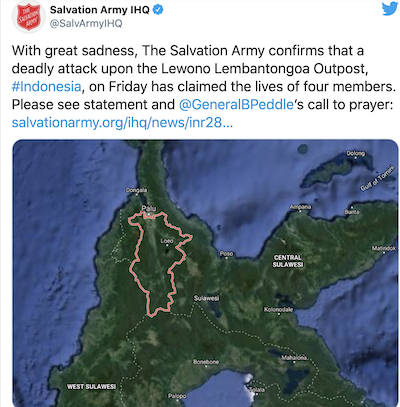 Four Salvation Army members were killed – one of them beheaded – in an ambush on Indonesia’s Sulawesi island.

The killers beheaded one of the believers and slit the throats of the three others, before burning down all of their homes. Authorities have blamed Sulawesi-based East Indonesia Mujahideen (MIT), a terror group that have pledged allegiance to ISIS.

Witnesses say the attackers asked the Christians for food, before murdering them. The victims are reported to be a couple, their daughter and her husband. Police say their bodies were discovered on Friday morning. Many locals who witnessed the appalling murder fled into the surrounding forests for their own safety.

The Salvation Army has called for prayer for the family of the victims, for the church, and for the peace of the region. “We would like to express our sorrow and condolences to the deceased’s families and members of the congregation who were affected”.

The president of the Protestant Christian Synod (PGI), Rev Gumar Gultom, demanded that a full-scale investigation be opened into the killings and lamented the fact that several chapels had been burnt down prior to the killings – the police dispute this, insisting that no churches were attacked during the rampage.

In 2005, three Christian schoolgirls were beheaded by Muslim extremists.

Human Rights Watch researcher Andreas Harsono told Reuters that the attack was “another serious escalation against the Christian minority in Indonesia”.

The Salvation Army confirmed that one of their churches “was burned down along with six homes of members”.

“We find the news from Lembantongoa greatly disturbing,” said General Brian Peddle, international leader of The Salvation Army. “Our hearts go out to our people who have been victims of evil, and to the families of those whose faith have caused such harm. I call upon all Salvationists to pray for each person who has been affected, for the continuing witness of our people, and for healing in the communities. I ask our global community to join us in this prayer, and believe that as peace finds its place, evil will be defeated”.

(With inputs from AFP & Reuters) 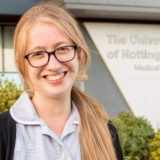 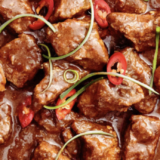