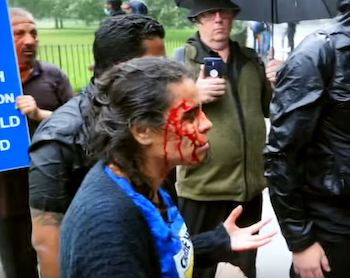 A Christian woman is calling for better law enforcement at Speaker’s Corner, after being slashed with a knife.

Evangelist and former Muslim Hatun Tash, 39, who was stabbed at Speakers’ Corner, Hyde Park, on Sunday has claimed that the venue has become hostile and dangerous for evangelical Christians. She told The Times that over the past two years she had been verbally and physically assaulted at Speakers’ Corner, which is known for freedom of expression.

A man dressed in black with a hood and face mask, unleashed a series of violent stabs at Tash’s throat and body which left her with wounds to her face and hands. Tash sustained an injury to her head as she preached at the popular debate spot whilst wearing a Charlie Hebdo T-shirt.

She collapsed with blood down her face. Her assailant later fled the scene as some of the other 30 people there confronted him. The knife used in the attack was recovered.

According to friends and colleagues of Christian ministry Hatun has worked with, the 39-year-old woman “is fine and under medical attention”.

A fortnight before she was attacked, Tash had begun legal proceedings against Scotland Yard over allegations of false arrest and imprisonment.

She claimed she was wrongly held in December and again in May over clashes with groups of Muslims.

Tash blamed “police inaction” for the attack, saying her assailant “was not afraid to do this right in front of them.”

Tash told the advocacy group, Christian Concern after the event, “Watching the video, the intention is clearly to kill me. I can’t believe this has happened in broad daylight at Speakers’ Corner. You do not expect such things to happen in Great Britain. Police inaction has led to what happened to me yesterday. In the past, they have seen it as easier to remove me than deal with people intimidating and threatening me. My attacker was not even afraid of the police as he did it right in front of them.”

Christian apologist Jay Smith, currently based in the US, has preached at the Hyde Park venue known for its free speech for some 25 years.  Tash began accompanying him at Speaker’s Corner in 2013.

Tash, who is the director of the ministry Defend Christ Critique Islam (DCCI), has received numerous death threats and abuse from members of the Islamic community.

There have been a number of concerns over Tash’s preaching style and the threat it could pose to her life, with many suggesting she take a different approach.

Smith argues that although Tash’s methods of evangelism may cause offence, Speaker’s Corner is the “one place in the world” she should be able to do that.

“This kind of violence has to stop. You have to have freedom of speech. It’s a Western ideal and one that is at the base of Christianity.”

“If this infuriates you, then discuss it with me, use words, don’t use knives. Unfortunately, a knife was used on Sunday.”

Both the Christian Legal Centre and the Free Speech Union have raised concerns with the Metropolitan police over their failure to protect Tash or bring her assailants to justice.

Sunday’s attacker has yet to be detained. Police are appealing to the public for further evidence while a Counter-terrorism investigation has been launched.

Police said that officers were continuing to search for the suspect. 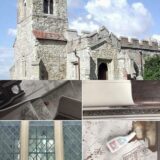 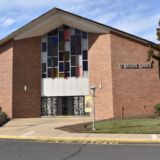 Next Story
Priest gets 7 years in prison