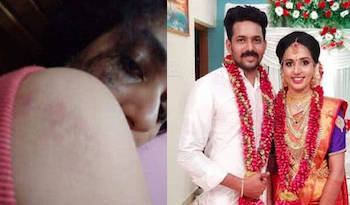 A 24-year-old Ayurvedic medicine student was found hanging in the washroom at her husband’s house in Kerala’s Kollam district on Monday.

Vismaya, a resident of Kaithode, allegedly ended her life after being abused for dowry by her husband Kiran Kumar.

A WhatsApp chat and pictures sent to a relative show the abuse faced by the young woman, who had a black eye and was badly bruised.

Vismaya told her relative in chat messages that Kumar often beat her up, verbally abused her father as he felt that he deserved more dowry, being a government employee.

“While I tried to leave the room, he pulled me by my hair and assaulted me. When I fell, he also kicked and stamped me on my face with his leg”, the message reads.

Kiran Kumar, an assistant vehicle inspector with the Motor Vehicles Department, was gifted 101 sovereigns of gold, more than an acre of land, and a car, for their wedding last year.

Vismaya was a final year BAMS (Bachelor of Ayurvedic Medicine) student in a college in Pandalam. The couple got married on May 31 last year. Kumar demanded ₹10 lakh instead of the car. In January this year, he reached Vismaya’s house drunk and beat her up. Vismaya’s brother Vijith too was assaulted when he tried to stop him. Though a complaint was filed, the family opted for a settlement later. Vismaya had stayed with her family after the incident; however later returned to her husband’s house.

Her father, Thrivikraman Nair, said his daughter would never kill herself and said the family suspected foul play.

The Women’s Commission has registered a case and the police have begun their investigations.

Meanwhile, another young woman Archana, 24 was found burnt to death on Tuesday.

She was a Bsc nurse and was not allowed to work by her husband Suresh and was harassed, her father told media persons. 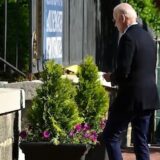 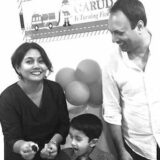