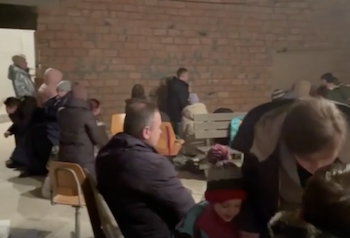 A catholic church in Kyiv has sheltered 50 Ukrainians that include 27 children and their mothers, as residents continue to seek safety from the escalating Russian invasion.

Other clips showed children wearing warm clothing and playing inside the church as adults appear to set up sleeping arrangements using mattresses on the floors.

The church has space to provide temporary shelter for up to 50 people, and 27 children are amongst those currently taking refuge, Fr Vyacheslav said.

“Thanks to our underground shelter, they are here. We are currently providing them with a sufficient amount of everything they need”, Fr Vyacheslav told Reuters.

The Metropolitan of Kyiv of the Moscow Patriarchate Onufriy (Berezovsky) has given orders to use crypts and lower floors of churches as shelters from bombing. Metropolitan Epiphanius (Dumenko) of the autocephalous Orthodox Church of Ukraine has done the same.

Fr Bogdan Prach, the rector of the Catholic university, appealed for support from the global academic community as Russian troops advanced on Ukraine’s capital, Kyiv, about 300 miles to the east.

“Despite the harsh circumstances and no matter how great the challenges stemming from today’s world crisis, our spirit remains strong, and together with the help of our Lord, strong Ukrainian army, and inexhaustible global academic support, we are incomparably stronger to defeat the evil that rebelled against humanity.” 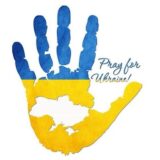