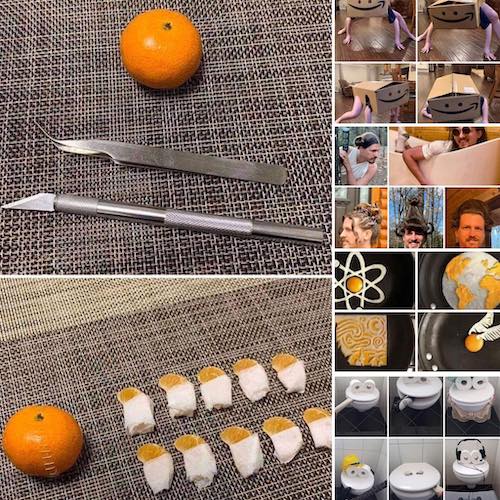 Just came across some impressive lockdown creativity. A hairstylist is doing her boyfriend’s hair each day of quarantine. So far we have Princess Leia, Amy Winehouse, 90’s prom, Cindy Lou who, and George Washington. Meanwhile some of us are still wondering if it is Sunday today or still March. Or is it April?

One chap is doing surgery on oranges  and pretending to deliver multiple orange segment babies swaddled in tissue paper (check the above pic if you don’t believe me) I shudder to think what next; as I live such a boring life comparatively, not slicing anyone or anything.

One man is hopping around in cardboard boxes and another is doing up his toilet seat.  Yet another is frying eggs into fancy shapes (Been there, tried that, failed that)

People are beyond bored staying at home during the lockdown. Not all of us are used working from home or spending much time cooped up in one place and it’s starting to show.

Yours truly is big on hobbies too, especially every summer. At our house, it all started on a weekend. I was on annual leave; fighting boredom and I heard that somebody in church wanted to donate an organ (the musical kind). I remembered that I wanted to learn several things before I died and organ playing was one of those.

The UAE where I grew up, is supposedly a great place to learn new hobbies. Where else can you casually tell friends that the previous day, you got back late after dune bashing in the desert and a Taikwondo class at the club? I have done neither – but I’m sure there are sensible people who do such things. Anyway, my guitar practice is still stuck at the ‘Raindrops on Roses, twang, twang’ stage, so my sibling choked on his food when I mentioned my new desire. That kept organ playing on hold.

With mum’s friends visiting, I had to show some interest in needle work. I have never been skilled at that. In school, they called it SUPW – socially useful and productive work. My old schoolmates can tell you that my work was neither productive nor useful, socially or otherwise. Wool and thread were all over the house except in my hands. It takes a lot of patience and hard work to complete giant-sized cross stitch patterns, I assure you.

I had already read my entire book collection several times over, so I took up reading online. That kept me awake till dawn and I had to change my glasses faster. But the internet helped me meet a lot of smart and caring women on websites for expatriate women. We discussed everything from colds to clothes. I still love doing that.

Baking is great. I hated cooking and still do, most days. But I later realised that the greatest joy for a homemaker is watching your family enjoy a meal that you have cooked. Never mind the occasional days when the dish looks like something the cat dragged in. Edison failed sometimes.

Gardening became the next hobby. I had meagre information that I got from the internet, but I managed to plant the seeds. I weeded and watered with gusto and was amply rewarded when I saw lady’s fingers and tomatoes in our balcony. But I knew nothing about harvesting the crop. I got mixed opinions. Some wanted me to pluck the vegetables straight away, while others believed that letting those ripen on the stem would help bring out the flavour.

So, I posed beside the fresh vegetables and took photographs – for so long that the lady’s fingers dried up on the plant. We saved and used the tomatoes proudly though. It felt great to announce to guests that our tomatoes were home-produced. I became ambitious and wanted a flower garden, but that idea got nipped in the bud when an acquaintance said that she thought that Calceolaria was something rude.

Eating out has always been a popular option, but since we wanted to fight the flab, we decided on tea at new cafes, instead of dinner. We friends discussed world events there. But in a week, I had had so much tea that it tanned my stomach.

Youth activity was the next in line. I want to say that I helped many children, but the only thing I did was baby sit and play with them all day. All those visions of me training the future premier of some country came to nought.

Sport, which we love as a family, was out of question. The only sport I could enjoy then was swimming. It was great fun. Never mind that I forgot all the good strokes. I swam while the children in our building watched. We had races in the pool; I was the only adult competing. Everything went well till I attempted a new stroke that a little boy taught me.

“This is the way you do it, Aunty Linda”, said the imp while he dived in.

Myself: Cough, choke and splutter.

“Now you must dive again”

I contacted pneumonia and was bedridden for a month. There ended my search for adventure. But I did take up knitting again. 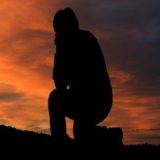 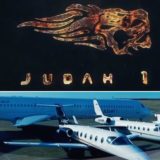 One Reply to “Lockdown hobbies and more”